My OCD like perfectionism is the cause of a lot of dissatisfaction. It’s also the reason for my inefficiency. It’s not laziness, or my inability to prioritize that limits my output, tho these things do play a role, it’s just that it takes so damn long to get anything to the point where I’m prepared to call it finished.

This is especially apparent when it comes to retouching photos. It all starts off quite well. I look at a photograph I’ve selected for editing and notice a few obvious things. A skin blemish here, a film scratch there, a couple of dust spots, a bit of dodging and burning, then I’ll call it done. But by the time I’ve dealt with these obvious issues, more subtle but equally detrimental imperfections begin to make themselves known. Smaller skin blemishes, finer scratches, odd shadows and other details that detract from the picture. Sometimes it’s hours later when I finally hit save, and I do so knowing that I’ve only finished one image when there’s a load more to get through, and most people wouldn’t even notice the difference if I put the before and after images side by side.

My decision to focus on film was an attempt to get around this time in front of the computer. High resolution digital cameras had me counting eyelashes and large pores. There’s something kinder about film, especially the grainy black and white variety I prefer. But I still find myself spending hours staring at a screen, painstakingly pushing around pixels till everything looks just right. A lot of my aesthetic comes from this struggle. My love of motion blur, camera shake, out of focus subjects, deep shadows, all as much a search for a photograph that doesn’t require retouching as it is an appreciation for something other than the tack sharp, clinically clean image of a flawless model in a perfectly flattering pose. 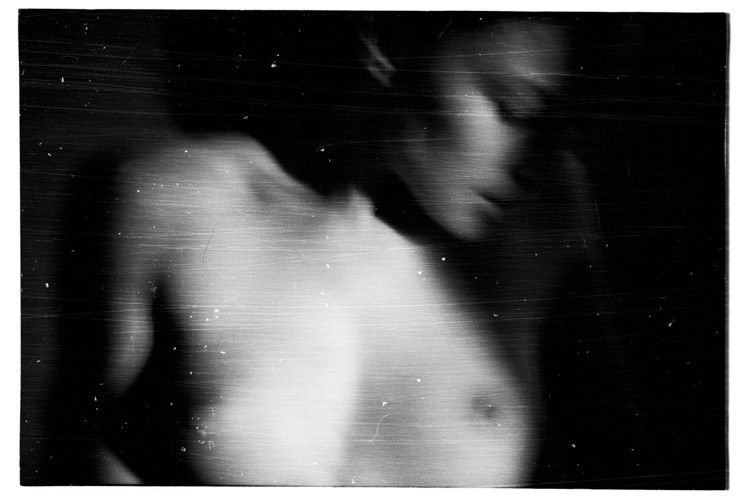 Not only are there plenty of people out there doing this very well already, these photos so often lack any sense of atmosphere, so rarely evoke any emotional response, and almost never demand a second look, or suggest something deeper.

But back to my plight. What more can I do to create an evocative image that doesn’t require I spend every spare moment sitting in front of a computer? How could I not just embrace imperfection, but use it to prompt, provoke, and tantalize? At what point do imperfections add rather than subtract? And how can I control these imperfections without doubling up on screen time, or defacing my darling negatives?

So I did some experimenting. It won’t work for every image, but it does for this one, and if this tension between my perfectionism and my reluctance to be stuck staring at a screen for hours on end plays a part in directing my quest for the perfect provocation, it wouldn’t be the first time.